Recently pod systems flooded vape markets. They started spreading like a pandemic. However, you may still find a lot of advanced users still developing and using their vicious mechanical mods arsenal despite the market change.

Mechanical mods may seem attractive to vapors for two reasons. For a start, mechanical mods look generally incredibly attractive and well-made pieces of art. The looks appeal to users due to comfortable grip and powerful appearance. The second reason maybe the fact that mechanical mods users are usually advanced users. Hence, the ability to handle mechanical mods safely is interpreted as having high level of proficiency in vaping generally.

In fact, the term professional vaper may sound cooky and puts vape at a level of a science course while it is very much simpler. The good news is that if you just got into vaping and you read this article patiently, you will end up with all the necessary knowledge to beat those “pro-vapers” out there. In this article we will discuss the definition of mechanical mods, their types, why and how to use them. And how to handle mechanical devices safely and get to know what you need to know in terms of vape safety generally.

What is a Mechanical Mod?

Mechanical mods users believe that the flavor resulting from the use of such devices is exceptional and unmatched compared to the vape and flavor quality resulting from regulated devices and pod systems. Indeed, Dukhan Store also agrees with this opinion. But this is not the only pleasure, as each user can also employ their personal taste and creative minds by customizing a combination of vape gear to result in a unique setup that suits individually and help expressing how unique they are. Every change in the composition of mechanical devices directly affects performance, the user can combine a unique blend of high-end coils, atomizer, drip-tip and batteries to come up with a unique experience.  This description may be poetic, but it is also realistic! 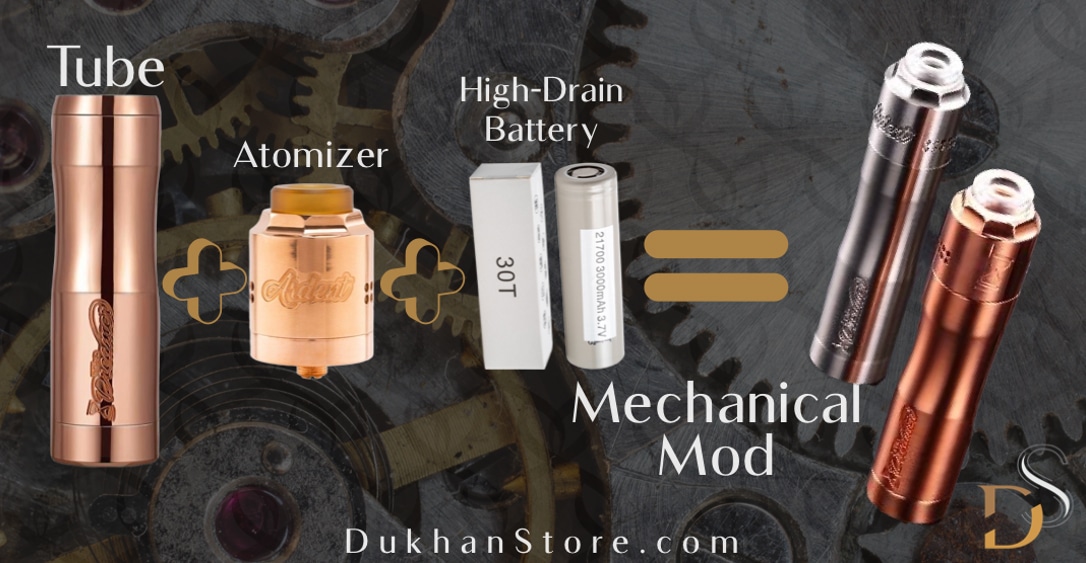 What Types of Mechanical Mods are there?

Mechanical mods differ depending on how many batteries they host and how they are linked together. We can name four different types of mechanical mods. They are as follows:

Cloud Chasing, your guide to grow from newbie to pro

Cloud Chasing, your guide to grow from newbie to pro  A - Introduction Are you vaping for more than a few months now? Well, ...

END_OF_DOCUMENT_TOKEN_TO_BE_REPLACED

I am 21 or Older I am Under 21
Start typing to see products you are looking for.